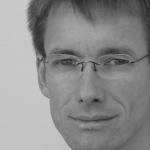 Markus received his MSc degree in Physical Geography and Landscape Ecology from the University of Hannover in Germany in 1999. He worked at the Institute of Geography as Research Scientist and teaching associate for two years. From 2001 to 2007, he was a researcher at FBK-irst (formerly ITC-irst), from 2005-2007 also at Centro di Ecologia Alpina. From 2008 to 2016 he was employed as head of the GIS and Remote Sensing Unit at Fondazione Edmund Mach, Trento (Italy). In 2015 he joint mundialis, a Bonn/Germany based business which specializes in the analysis of remote sensing data and the processing of voluminous geodata using cloud based processing.
His main interests are remote sensing for environmental risk assessment and Free Software GIS development. He is author/co-author of two books on the Open Source Geographical Information System GRASS and various papers on applications in GIS. He is founding-member of GRASS Anwender-Vereinigung e.V. and the Open Source Geospatial Foundation (OSGeo.org). In September 2006, he was honored with the Sol Katz Award for Geospatial Free and Open Source Software (GFOSS). In 2010, he obtained the the degree of a Doctor of Natural Science (Dr. rer. nat.) in Physical Geography. Since 1998 he coordinates the GRASS GIS development.